Home
/
Shoes
/
Design Your Own Nike Air Force One Shoes 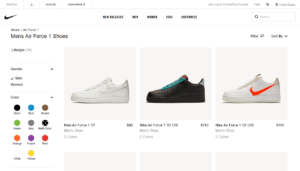 The Air Force 1 shoe is a product of Nike, which was released in 1982. The Air Force 1 was the first Nike basketball shoe to use the Nike Air technology. The name is a reference to Air Force One, the plane that carries the President of the United States. The shoe was popular in the early 1980s and then again in the late 1990s and early 2000s. These shoes are one of the most popular and sought after items in cities and many suburban areas. Due to their popularity, Air Force 1s are custom made by people and sold online.

Customizers change the colors of different parts of the shoe like the swoosh, heel, toe, bottom on request. The shoes are also made with different colors for special occasions such as the Olympic Games and released in colors commemorating regions such as Puerto Rico, New York City, Detroit “D-Town”, and the West Indies. Some music industry members such as Roc-A-Fella Records and some athletes such as Lebron James have their own special versions made by Nike. There is also one active NBA player to play in them on a daily basis – Rasheed Wallace, who played his whole career in AF1`s High Tops.

The rapper Nelly made a song called “Air Force Ones”. In the hip hop subculture, the Air Force 1 shoe is a reflection of the individual. Some like “white on whites” while others, go as far as dyeing the inside of the shoe to make them unique. The shoe originally came in a low top and a high top, the latter featuring a removable strap. Nike continues to produce these two variations of the Air Force 1 and, in 1994, they added a Mid top to the lineup with a non-removable strap.

The shoe has at times featured smaller rubber “jewel” swooshes and metallic plastic “super jewel” swooshes. In recent years, Nike has offered customers the opportunity to design their own Air Force 1’s in exclusive venues in New York, London, Paris, Milan and Los Angeles as well as online on NikeID. Nike has also produced a few “Lux” colors of Air Force 1s in Italy which are made entirely of Italian leather. 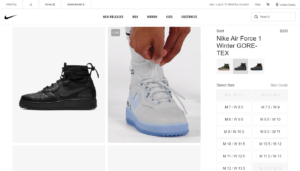 The Air Force 1 GORE-TEX High pushes the AF-1 to new heights in style and functionality. It features GORE-TEX tested water-resistant technology in tandem with duck boot tooling and a rubber Swoosh design, making it a force in any weather.

HOW DO I CLEAN MY AIR FORCE ONE SHOES? 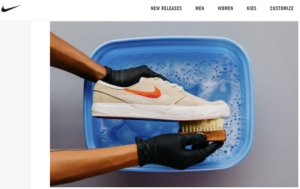 Cleaning your Air Force Ones is quick and easy and does not require a lot of tools or a washing machine. To keep your footwear fresh and shiny over time, we recommend proper care and also maintenance, including cleaning. You can keep your Air Force One sneakers ready for peak performance with a few easy cleaning steps:

Can I put Air Force One Shoes in the Washing Machine or Dryer?

We do not advise placing your Air Force One shoes in a washing machine or dryer or making use of extreme cleaning products (like bleach). To reduce shoe odor clean your insoles from time to time. To do so, remove the insoles and use the same cleaning steps for the outside of your shoes. And be sure to air dry them completely before putting them back in your shoes. If bad smells persists, you may want to replace the insoles. Replacement insoles are available at most sporting goods and shoe stores.

This site uses Akismet to reduce spam. Learn how your comment data is processed.